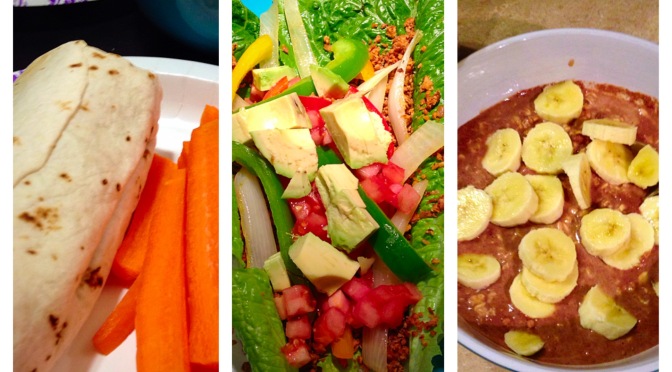 Good afternoon folks! I’ve got five more recipes for you this week.  And I am continuing on my veggie kick so they are almost all vegetarian or vegan  (The burritos are vegetarian if you use vegetable stock instead of chicken stock).  I’m planning to keep these Weekly Recipe Roundup posts going until the baby gets here. But we are at 39 weeks on Sunday so I may be taking a few weeks off any day now! 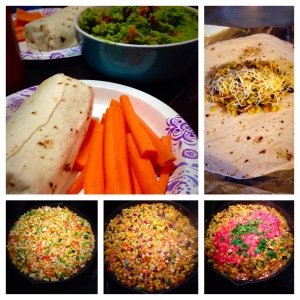 What we changed:  So this recipe is actually called “Black Bean, Sweet Corn and Tomato Quinoa Burritos” but there weren’t nearly enough veggies in it for my taste so I added.  A lot.  I made the same amount of quinoa and used the same amount of black beans and corn as suggested, so the proportions on mine were probably a little off from what she intended with all the extra vegetables.  But it was so colorful and it turned out really yummy – and probably had a lot more nutrients.  So if you want to make the extra veggie version, add a chopped onion before adding the corn.  And after adding the corn, add a chopped green bell pepper, half of a chopped orange bell pepper, a chopped zucchini, a chopped yellow squash, and – my favorite hidden vegetable of choice -a handful or two of shredded carrots.  Then when adding the beans and chicken broth, we used a full cup of broth instead of half a cup.  I was also slightly generous with the spices (no level spoons when I made it).  We used a Mexican cheese blend instead of Monterey Jack.  With all the extra veggies it made 10 burritos instead of 6, so we put 4 in the fridge for this week and 6 in the freezer for after baby arrives 🙂

My thoughts on the recipe: These were delicious!  And much more hearty than I expected them to be.  We served them with carrot sticks and green pea guacamole and it made a completely satisfying dinner for us.  And we also made them the night before and wrapped them in foil so all we had to do was warm them up in a 350 degree oven while we made the guac.  I don’t know if they would have been any better freshly made, but they reheated beautifully.  I am really excited that we have 6 in the freezer to enjoy after the baby gets here.

What we changed: In addition to the minced garlic in the food processor, I also seasoned with a little onion powder and garlic salt.  We added a diced tomato at the end.

My thoughts on the recipe:  This guac is really… interesting.  It looks like guac, but the peas are way sweeter than avocado only guac would be.  I wanted to try this recipe because Whole Foods suggested it as a way to “add nutrient variety and subtract cost.”  If you aren’t expecting it to taste exactly like standard guac, you won’t be disappointed.  It really wasn’t bad, especially when mixed with my favorite salsa (currently Mrs. Renfro’s Roasted Garlic Salsa).  But it is for sure different. 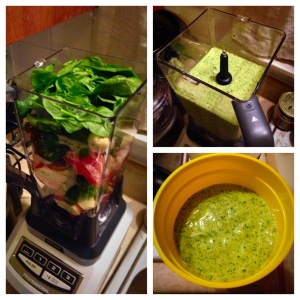 What we changed: I didn’t peel the apple.  I used coconut milk instead of almond milk to thin (just because that’s what I had on hand from last week’s recipes).  I added a couple of tablespoons of hemp hearts to give it a protein boost.  We were very generous with the spinach (no measuring cups, but we filled a quart-sized ziplock for the freezer the night before).  I also added an extra banana to make it a little bit sweeter.

My thoughts on the recipe:  This was a really yummy, quick breakfast for us this week.  The grapefruit adds a nice tang and it just feels good starting the day out with all these fruits and veggies.  Will took his as a to-go breakfast and nursed it throughout the morning.  I ate half of mine in the early morning and the other half as a mid morning snack just before my 10:30 class. 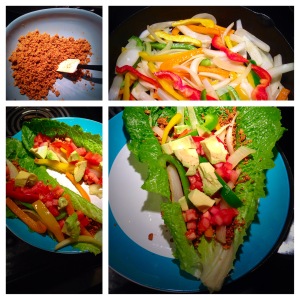 What we changed: We didn’t make the cashew sour cream.  We didn’t use green onions or lime juice for garnish.  Our toppings consisted of diced tomatoes, avocado, and salsa.

My thoughts on the recipe:  I have been consistently impressed with the vegan recipes from ohsheglows.com.  If you haven’t checked out her site, you should definitely do that.  This one isn’t a 10/10 simply for functional reasons.  The wraps were a little difficult to eat.  We made the leftovers into vegan taco salad for lunches later in the week and that worked much better.  The “taco meat” was really tasty though, and it went great with the sautéed onions and bell peppers. 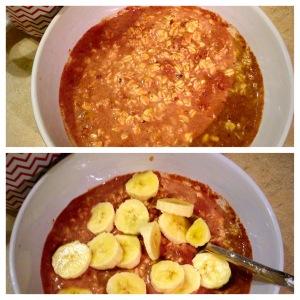 What we changed:  We used real skim milk instead of almond milk (we were out of milk substitutes).  I forgot to put in the salt.  We used coconut sugar instead of baking stevia.  We used a single serve packet of whey protein instead of measuring 1/4 cup of protein powder.

My thoughts on the recipe:  We discovered overnight oats last spring when we did the BuzzFeed 2-week Clean Eating Challenge.  I love it because it is so simple to make and all you have to do in the morning is grab a spoon.  It makes a pretty good to-go breakfast too since you make it in a covered container.  Confession:  I haven’t made overnight oats since last June because during my first trimester anything involving Greek yogurt (or even the thought of it) made me queasy.  But luckily, I’ve finally gotten over that 🙂 So when I saw this recipe on Pinterest, I knew we should try it out.  Plus I figured with the chocolate, it might be a good way to ease back into the overnight oats flavor. This was definitely chocolate-y oatmeal!  It wasn’t too sweet, just really chocolate-y.  I quite enjoyed mine with the addition of a sliced banana.  If I could figure out how to get a little peanut butter flavor in there too I probably would have liked it even more 🙂  Will is not a huge chocolate fan so he didn’t enjoy this one as much.  I believe his exact words were: “Meh. It was ok.”

A Blog Brought to You by the Letter F