Good morning my lovely readers.  I have 5 recipes for you in this week’s roundup.  And quite a variety too: only one meat dish, a couple of vegan options, and a paleo slow cooker “oatmeal.”  I am surprising myself with the vegetarian kick I have been on.  I guess I am feeling like I need more veggies after the holidays.  Luckily there are lots of yummy options available.  Let me know if try any of these and how they work out for you.  Happy eating!

What we changed:  We basically doubled the recipe.  Who wants to use 1/2 and apple and a portion of a can of mandarin oranges?  Besides, more kale is good for you, right?  I also used unsalted, roasted sunflower seeds instead of raw ones because that’s what I had on hand.  We used red kale for this – I don’t believe the recipe specifies which kind to use.

My thoughts on the recipe:  After last week’s success with the kale Caesar salad, I was ready to give raw kale another shot and I am glad I did.  This was really delicious.  We paired it with the pork chops and it made an excellent side dish.  I am not sure that it would hold up on its own as a complete meal, but what a tasty way to add greens to your dinner!

What we changed: I may have been a little generous with the butter.  We had to cook the chops in two rounds because our skillet wasn’t big enough for all four.  We went by how the meat looked and didn’t stick to the three minute cooking times suggested (ours were longer).

My thoughts on the recipe: Umm…butter…apples…brown sugar…cinnamon…need I say more?  This was soooo good.  It was like getting to have dessert and dinner at the same time.  And surely it can’t be that bad for you, right?  I mean, apples are good for you and we paired it with a kale salad…

What we changed: I made this twice (one serving for me and one for Will) so we each had the large serving for breakfast.  I used the juice of half the grapefruit for each and (once again) didn’t worry about measuring cups.  I also used half a cucumber in each instead of measuring.  I may have used a little more kale than called for too.  We did not take the optional algae supplement that she suggests.

My thoughts on the recipe: Please go look at her pictures – they are much prettier than mine.  This made a really great breakfast.  It filled us up and lasted all morning.  And it was actually really tasty – very fresh with just the right amount of sweetness.  I may be starting to sound like a broken record, but I had no idea how good vegan recipes can be!  Also, since we prepared the kale the night before (who wants to de-stem kale at 6am?) and froze it overnight, it was relatively quick to prepare and makes a good on-the-go breakfast if you are in a hurry.

What we changed: I used balsamic vinegar instead of lemon juice in the parsley and tomato salad topping.  I didn’t add use salt for the roasted items or the sauce (it’s optional according to the recipe).  I used a splash of coconut milk instead of almond milk in the sauce (though it says you can use water too).

My thoughts on the recipe:  I really liked the taste of this one, but Will was not a fan.  He said he would give it a 6/10.  It definitely has a lot going on.  Lots of flavors.  He liked the sweet potatoes and chickpeas, but wasn’t too keen on the hummus sauce or the parsley and tomato salad.  The other drawback to this meal was that we were both hungry about an hour later.  That might have knocked it down to a seven… but it looked so pretty and I really did think it was tasty. 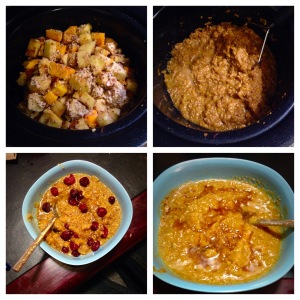 What we changed:  We only soaked the nuts for a few hours because I forgot (oops), but it really seemed to work out fine.  It probably helped that my raw almonds happened to be sliced raw almonds.  I used 2 tablespoons of coconut sugar and store bought coconut milk.

My thoughts on the recipe:  This was really yummy – hearty, warm – perfect for a winter breakfast.  And I am still feeling full 3 hours later 🙂  Will topped his with dried cranberries and maple syrup.  I drizzled mine with a little maple syrup and coconut milk.  I also loved that it cooked overnight and was ready when we got up – just had to use the potato masher which took no time at all.

A Blog Brought to You by the Letter F